AKA updates for Arse Man 2 As none of you know, Arse Man II reached development hiatus after Christmas 2009. That was over two years ago. I am proud to announce that production resumed in November 2011, and is still under steady development, as of January 12, 2012. It has been quite a rocky time to say the least, however. During the course of a month, I had gotten a lot finished. Well, maybe not. In that month, I finished the first boss, and started work on the next level. Work began again in the middle to end of December. It has since slowed down since January 7th, due to Flash bugs, crashes, loss of data, corruption of data, and basically, everything going wrong. I was at a point where I thought everything would be lost. I literally had no new files or copies that worked properly or even opened. Somehow I do, but they do not work well. Currently, I'm in the process of re-working the entire game thus far into a whole new file. On top of this, current, older content from pre-hiatus is being, and must be, revamped and altered. This will eliminate the dated mechanics and eliminate some bugs here and there.

Hopefully this whole mess will be sorted out, but it's not looking too well. This will definetly slow down the process of finishing the game. On the positive side, Arse Man is coming back. I've been working on and off on Arse Man 2, I wanted it to be aThanksgiving release game, but now it's going to be on Christmas. Thisgives me lots of time, but I can't get lazy. I need to actually startWORKING ON IT. I'm really discouraged though... I'd say it's 30-40%done. It should start speeding up though, as I'm getting better at thisstuff. I've made two ''worlds''(their more like minis) and I'm workingon the third out of four. The cutscenes won't be fun, and neither willthe co-op. But I'll get it done.

And then there's cutscenes, gameplay, glitch fixes, co-op, sounds, enemies, ugh, so much crap. At least the soundtrack is pretty much picked out. 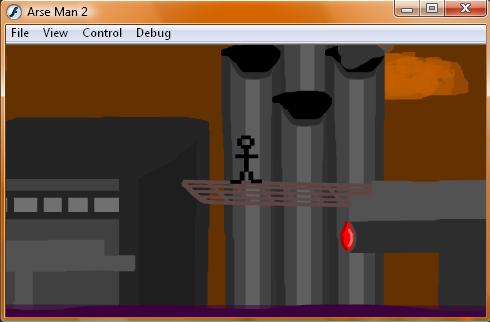 I decided to finally start ARSE Man 2... I've been working hard mostof the day, and I haven't made it far. It's taking alot longer than itshould, but this one has much more effort, detail, etc., and should belonger. As much as I want to, I'm not going to reveal anything.

This was originally going to be on PSP like the first... but sinceit features something really awesome, it slows it down brutally... thisis both good and bad. This is good because there will be bettergameplay and controls etc. Only problem... I CAN'T PLAY IT ON MY PSP.

I should be done in less than a month... Terrible quality screenshot: 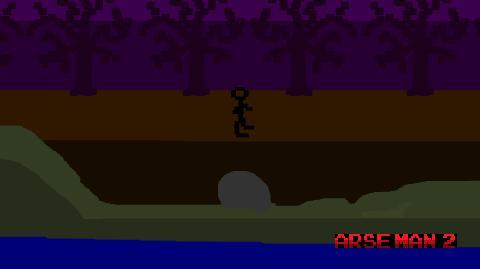 I just found my own site. I guess I'll use it to update my Flash games and whatnot.

Start a Free Blog at Webs.com